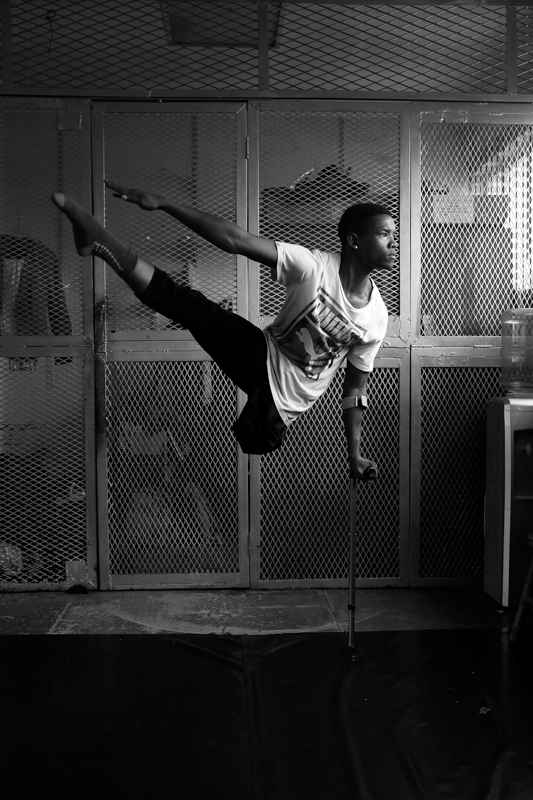 “Musa's Struggle and Search for the Stage”

Musa's Struggle and Search for the Stage'. As a child, Musa Motha was diagnosed with osteosarcoma, a cancer that affected the bones in his left leg. He was bedridden, and had his leg amputated at the age of 11. His healing is attributed to his positive outlook. Now in his early 20's, Motha's incredible talent and tenacity is inspiring audiences worldwide. Professional dancer, Musa Motha , A South African performer who dances on crutches, performs in front of a lively crowd at The Hexagon Theatre at The University of Kwazulu Natal, in Pietermaritzburg. "23-year-old Musa Motha uses gravity to perfect his technique and his work is getting him noticed abroad. " Motha's leg was amputated when he was 11-years-old after being diagnosed with cancer. "He had dreams of being a professional soccer player but quickly realised that he wouldn't be able to pursue this dream. He joined the Vuyani Dance Theatre and found his passion. The company was involved with the University of KwaZulu Natal Drama and Performance Department Pietermaritzburg when they hosted internationally renowned dancer, choreographer, teacher, director and scriptwriter Gregory Maqoma at this year's Dance Experia Festival. The festival included a masterclasses which was open to the public and ended with a solo performance of Ketima by Maqoma, followed by Rise by Vuyani Dance Theatre choreographers. Motha was also lead in Cion: Requiem of Ravel's Boléro in 2019. He has also performed on the New York City Center stage.Musa's focused mindset is helping to break barriers for the disabled.